The district of Banfora has received direct financial support from Oxfam Burkina to help in the implementation of the communal strategic plan for water, sanitation and hygiene. This partnership is welcomed by both parties who are committed to improving the well-being of the population through adequate access to water and sanitation.

Due to decentralisation of WASH services in Burkina Faso, the local population hold destiny in their own hands. As a result, the district is responsible for drinking water supply and sanitation and has to provide the population with adequate and sustainable services. This transfer of power is supposed to allow local authorities easier access to capital to finance investment projects.

In practice, decentralisation is much more like a transfer of responsibilities with a view to sharing responsibilities between the state and the communities. A policy is promoted, placing the municipalities at the centre of the system without actually being able to carry out a management role. Human or financial resources have not been able to support this transfer in an adequate way.

The reality on the ground

However, there are many external technical and financial partners jostling around the national WASH sector management body to support the cause of water and sanitation. The funds received are generally used to carry out specific and direct projects for the benefit of the population without going through the communes. The NGOs, present in the field, intervene more in capacity building of the communal authorities than in the direct transfer of resources. The main reason given for this is a lack of trust in the municipalities being able to manage the transferred funds reliably. However, one cannot work along the national guidelines on WASH and achieve SDG 6 by 2030 without any financial, material and technical support.

Without capital it is not possible to finance investment projects or build improved drinking water and sanitation facilities for the benefit of the population. This shows the predicament of the municipalities.

However, Oxfam has decided to place its trust in the Banfora district council through direct funding of 36 million CFA francs (66 000 USD) for the implementation of WASH services. Given the high stakes involved and convinced by the leadership of the municipality's chief executive and his collaborators, the NGO mobilised an additional funding of 45 million CFA francs (80 000 USD), thus bringing the total to 81 million CFA francs (146 000 USD). This funding will be used to implement the "Yelemani Ji" project which will benefit ten villages in the Banfora municipality over a period of 8 months. Its objective is to contribute to the improvement of the health of the population by ensuring better access to drinking water.

Support from Oxfam and technical assistance from IRC

In order to achieve this goal, the project includes the construction and equipment of boreholes, the organisation of awareness-raising activities on hygiene and sanitation, as well as information and social implementation meetings, to ensure better ownership of the initiative by the actors and beneficiaries. By combining training and infrastructure equipment, Oxfam intends to strengthen the capacities of the Directorate of Water, Sanitation and Public Hygiene. The implementation will be carried out by the district of Banfora with the support of Oxfam and the technical assistance of IRC which has been accompanying the municipality since 2015. 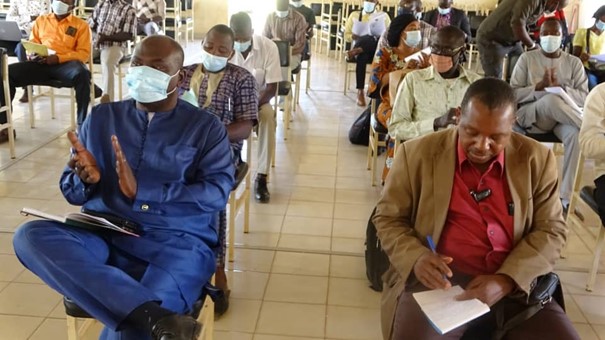 Representatives of all stakeholders proud of this new funding for drinking water (Ph A. Traoré)

In order to move from words to deeds as soon as possible, the project was launched on Thursday 11 February 2021 during an official ceremony presided over by the Secretary General of the Cascades region, in the presence of the Oxfam Country Director, the mayor of Banfora, the traditional, religious and political authorities and representatives of the beneficiaries.

"It is only natural that my organisation should join this initiative of the Banfora municipal authorities and make a contribution to the implementation of the strategic plan. As such, Oxfam is committed to supporting the commune and remains available to engage in the necessary dialogue, consultation and advisory support.” Omer Kaboré, Country Director of Oxfam Burkina, expressing his pride in this partnership.

The transfer of funds to municipalities is possible

This gesture by Oxfam is undoubtedly valuable support and an example to be followed by other NGOs and donors. It proves that the direct transfer of funds to districts is possible but requires a real commitment from the communal authorities. Moreover, this project is of great importance as it will make the daily life of the citizens of Banfora much easier and water shortages will become a thing of the past.

The mayor of Banfora, Aboubakar Hema, was grateful for this funding which "comes at the right time". Based on this, he resolutely intends to "continue the fight in the hope that one day each inhabitant of the city will have sufficient drinking water". On behalf of his entire team, he pledges to play his part in the proper execution of this project and "counts on the coaching and support of IRC, so that this partnership will be fruitful".

Efficient management of the funds and successful completion of this project are essential for the renewal of funds and to convince other donors. It is hoped that the results will live up to the expectations of Oxfam and Banfora.

Learn more about how the partnership came about in the interviews with the mayor of Banfora, Aboubakar Hema and Oxfam's Marc Kaboré.