The costs of continuous monitoring at scale: insights from SMARTerWASH, Ghana. 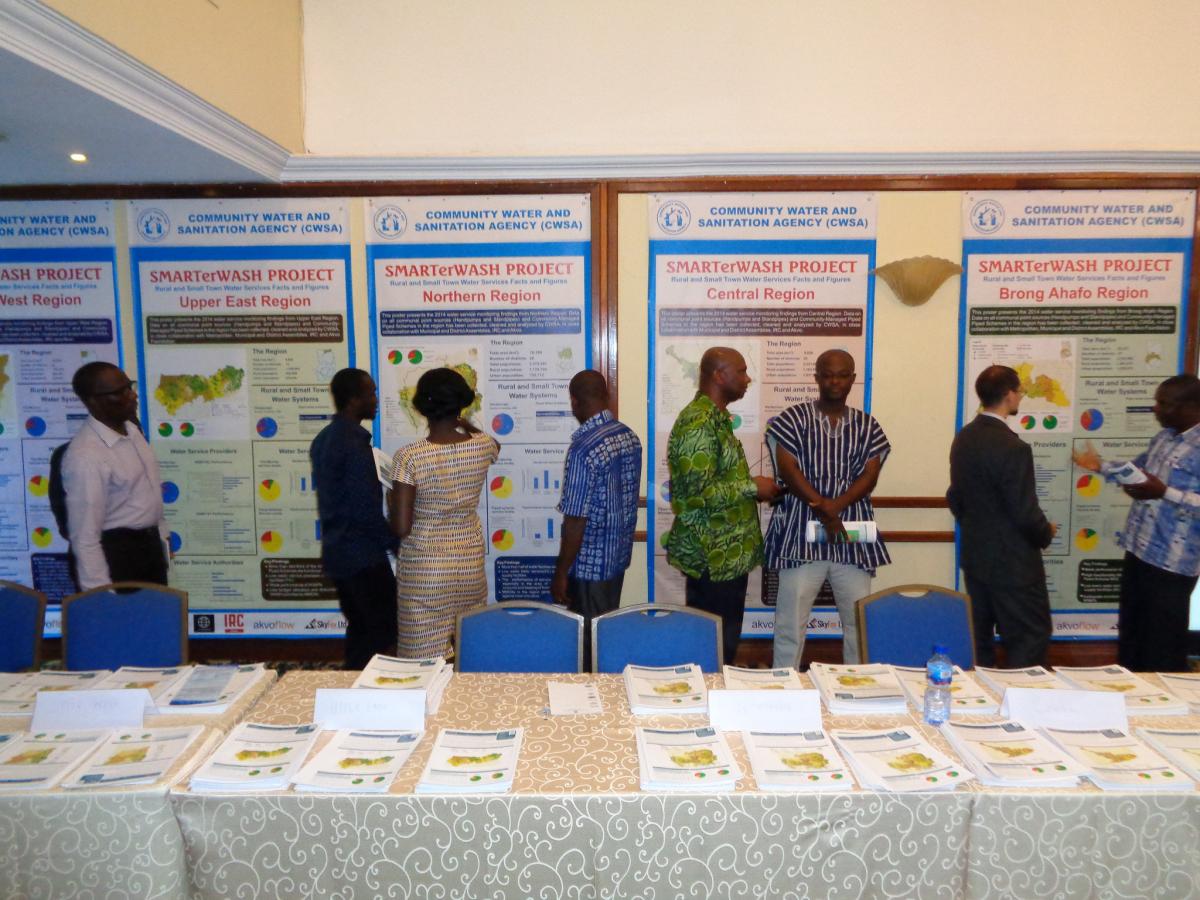 People involved in water services need good and reliable monitoring data at different levels to inform corrective actions, planning and policy making, checking progress against goals, regulation, holding service providers to account, etc. In many countries, initiatives have been, and are being undertaken to improve national monitoring systems. But what does continuous monitoring at scale actually cost? This blog presents insights from the SMARTerWASH initiative in Ghana.

The SMARTerWASH initiative (2013-2016) was designed to establish a system for nationwide and continuous monitoring of WASH services in rural communities and small towns in Ghana. The overall expenditure of the project gives information on the costs of developing a national M&E system. Furthermore, the baseline data collection process under this initiative is a useful source for costing water service monitoring at district and national level.

Costs of monitoring: an overview

As part of SMARTerWASH, baseline data was collected in 119 districts (of a total of 216 districts) in 6 regions (of a total of 10 regions) in Ghana in 2014/2015. All handpumps, community managed piped schemes, public standpipes connected to these piped schemes, management structures (Water and Sanitation Management Teams) and service authorities (district assemblies) in these districts were mapped and assessed against the national monitoring framework developed by the Community Water and Sanitation Agency.

The total costs involved in baseline data collection were found to amount to about 10,448 Euro per district, or about 0.08 Euro per person per year. This is more or less in line with the average costs of monitoring of 0.10-0.20 USD (which at the time of writing of this note amounted to 0.08-0.16 Euro), per person per year, as presented by participants of the 2012 RWSN e-discussion and referred to in Schouten and Smits (2014). At around 0.05 Euro per person per year, the costs for continuous monitoring are expected to be even lower. The rest of this note presents a breakdown of these costs.

Non-labour costs amount to approximately 770,010 Euro for 119 districts, or about 6,422 Euro per district. Considering an average district population of 125,000 people, this amounts to about 0.05 Euro per person. These are the costs for accommodation, workshop venue, transport and per diems of the enumerators.

In each district, data collection has generally been executed by six district-level staff members (the environmental health assistants, district engineer and community mobiliser). In several districts, data collection has been done by three teams of two people, while in other districts data collection has been done by six staff members. No difference was found in the average number of field days per submitter between individual submitters and 2-person teams. Also, no difference was found in efficiency (in terms of number of surveys submitted per submitter) between individuals and 2-person teams.
On average, each district-based data collector was expected to spend about 20 days in the field collecting data. In addition, data collectors spent time on training and data cleaning and processing, bringing the total number of days per data collector to about 25 days and the total number of man-days per district to about 150. Assuming a gross monthly salary of 250 Euro per month, this amounts to 1875 Euro per district, or less than 0.02 Euro (0.015 Euro) per person.

In addition, regional and national staff members from the Community Water and Sanitation Agency (CWSA) have been involved in training of trainers and training of data collectors, supervising field work, supporting data cleaning and analysis. Assuming time spending on this per district amounts to 40 days and assuming a gross monthly salary of 650 Euro per month, this comes down to 1300 Euro per district or about 0.01 Euro per person.

The costs of subsequent monitoring rounds are expected to be even smaller. This is because skills and knowledge have already been transferred to the district officials and therefore only re-training will be required. Secondly, because of the implementation of the continuous monitoring features such as the cascading questions, the monitoring surveys are simpler than the initial baseline surveys and require less time. Thirdly, through their involvement in the baseline, the district-based data collectors have become more familiar with the district and know where all the water facilities are located, which also speeds up the data collection process.

An estimated amount of 698,744 Euro is required to support continuous data collection across the 216 districts in the country. This translates to an average of 3,235 Euro per district per year or about 0.03 Euro per person. The details are presented in the table below. It also lists the labour costs, assuming a 20% decrease in time spending by district staff and regional and national CWSA staff and assuming that external support will not be required for continuous monitoring. This brings the total estimated costs of continuous monitoring to 5775 Euro per district per year, or 0.05 Euro per person per year.

Costs of development of an M&E system

Total expenditure on the SMARTerWASH project amounted to 3,764,124 Euro. This included expenditure on baseline data collection in 119 districts. Excluding the expenditure on baseline data collection leaves about 2,880,917 Euro, which was mainly spent on development of the monitoring system. Considering a total Ghanaian population of 27 million, the total costs of development of the M&E system amount to about 0.11 Euro per person. This amount goes up to 0.16 Euro per person when excluding the estimated 32% of people served by the national urban water utility Ghana Water Company Limited (GWCL) from the total population.